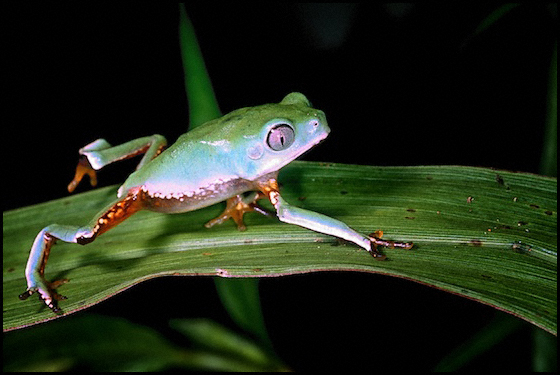 A juvenile Phyllomedusa bicolor walks across a leaf near the city of Iquitos, Peru. Despite being fairly common this is my only sighting of this frog.

And now we return to South America. Half of the subfamily species reside in the genus Phyllomedusa, and like I mentioned previously, most of those are in Brazil. But there are some wonderful representations in western Amazonia where I tend to spend my time. And one of those is known well enough that even non-herp people mention it – even if they don’t know the species. Most frog people will get an inquiry from a curious friend or family member about which frogs you lick to get high. Well, that semi-urban myth comes from a couple potential species and Phyllomedusa bicolor is one of them. The Peruvian Matses tribe has used the bioactive peptides found in the skin of this frog for hunting rituals. Waxy secretions from the frog are rubbed into a freshly burned wound where they are quickly taken into the bloodstream. The initial effects are generally vomiting and diarrhea but soon thereafter there appears to be a heightened sensory alertness. The increased energy and suppression of hunger allows hunters to range farther, faster, and longer on extended hunts when local prey is no longer available. There have been numerous studies on this frog and its pharmacological biology. I saw my first when Steve Waldron and I were in Peru. We were spending a week in the forests around Iquitos before heading out on a memorable Greentracks trip where several more first discoveries would occur. I was tracking the calls of some Hypsiboas cinerascens when Steve found a juvenile Phyllomedusa bicolor. My first and only of that species.

Another species that is known for its skin secretions is the common pet species P. sauvagii. This frog resides in hot dry savanna forests and rests high up in sundrenched canopy. It is known to use its hind legs to wipe a waxy secretion all over the body completely covering itself in a waterproof cocoon. The barrier helps keep the porous frog skin from losing any moisture and protects from the desiccating rays of the sun. Unfortunately, I have not seen this frog in the wild.

An intensely colored specimen of a Peruvian Phyllomedusa tomopterna shows why they are called tiger-leg monkey frogs.

And then there were my encounters with P. tomopterna, the tiger-leg monkey frog, in Peru and Ecuador. This widespread species covers much of Amazonia and beyond, reaching the northeastern Atlantic shores of South America. I have seen gaudily bright specimens and a couple a bit more subdued. Phyllomedusa tomopterna closely resembles P. hypochondrialis, a common species in the pet trade. Phyllomedusa tomopterna and P. hypochondrialis have a good portion of their ranges overlapping but P. hypochondrialis extends further eastward and southward on the continent. All of the species in Phyllomedusa lay their eggs overhanging ponds on leaves but fold the leaves to help hide and secure the clutch during development. This behavior is only exhibited in Phyllomedusa and the genus Phasmahyla within the subfamily.

Another representative of Phyllomedusa tomopterna. This one is from Ecuador.