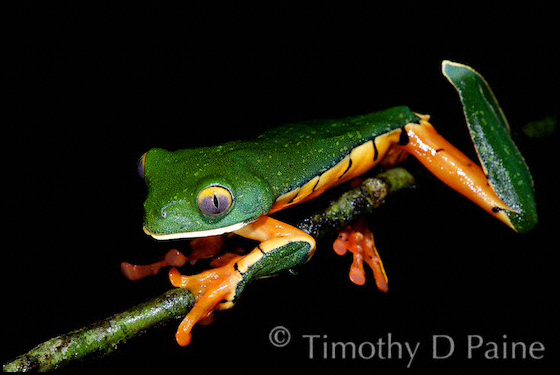 But all is not lost. There are a few good localities for C. calcarifer on the Caribbean slopes of Costa Rica but none are better than Brian Kubicki’s place near Siquirres. Brian’s home is also home to the Costa Rican Amphibian Research Center (CRARC). I plan on writing a bit more on his place in an upcoming blog article. But I have to say a bit about it now. That’s because soon after arriving I told him that my primary desire was to see a few new species, especially some leaf frogs. I didn’t have much time there and was a little skeptical when he told me “sure no problem.” I’ve heard that assurance countless times in the field. And while getting skunked I usually learn the basis comes from some sighting a couple years prior….at a particular tree. So I didn’t get my hopes up. But I soon learned that Brian knew his property, and the animals, well enough for his confidence. Because looking down a shallow ravine, in the beams of the flashlights, he pointed out several individuals clinging off vines and branches as they made their way down from the canopy. Wow! This is a stunning frog, matched only by its South American sister. There was even a tree hollow where egg masses clung to aerial roots dangling down. Inside the hollow I could see tadpoles wriggling up for a gulp of air. And the egg mass had the strange characteristic of containing eggless jelly capsules. A trait shared by members of Phyllomedusa but oddly not Agalychnis. 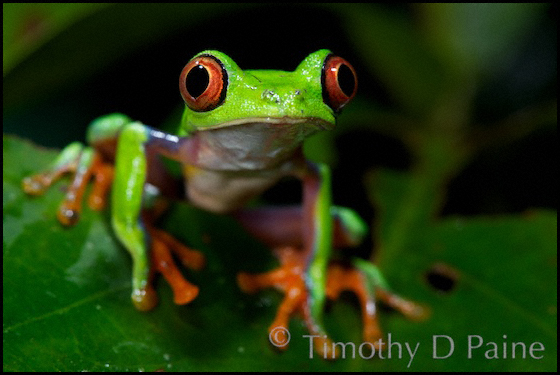 Its possible to confuse the misfit tree frog, Agalychnis saltator, with its sibling species A. callidryas, but its smaller size, blue-purple lateral striping, and more orangeish eyes will help identify it.

But Brian’s place was not just a haven for C. calcarifer. At CRARC you can easily see 5 of Costa Rica’s 6 leaf frog species, including the endangered Agalychnis lemur. In fact his place is one of a few known localities remaining for this slight and frail looking species. In 2005 Faivovich, et al., moved this species into the genus Hylomantis based on some shared physiology. But in 2009, using more genetic material, they suggest rectifying a resultant paraphyly of these genera by moving lemur back into Agalychnis, and possibly the other remaining species from Hylomantis. The only leaf frog missing from Brian’s place is A. annae, another endangered species now only found in a few localities in the central highlands of the country. At the guesthouse I found A. callidryas, the much photographed red-eye leaf frog. But more exciting for me was that I also found its sister species, A. saltator, a first for me. And once he took me into the forest we quickly arrived at a pond where aggregations of A. spurrelli come together to breed. The frogs climbed down their trees and oddly walked across the ground to reach the pond. There were amplectant pairs making their way to or in the vegetation above the water. Lone frogs were also sitting upright, possibly judging their direction and chances based on calling. A. spurrelliis one of the explosive breeding species of leaf frogs where massive aggregations form in a stunning spectacle.

A pair of amplexing Agalychnis spurrelli make their way towards a small pond where they’ll join others to lay their eggs on leaves overhanging the water.