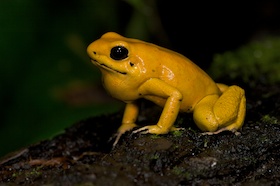 For years explorers have searched the Neotropics for extraordinary finds; lost cities of gold, lands of warrior princesses, mythic beasts, and most recently the source of deadly frog poisons. Frog poisons were said to be used by indian tribes for hunting and were powerful enough to kill a man several times. The poisons gave the group of frogs from which they were derived the name of poison-dart frogs, poison-arrow frogs, and dart poison frogs. All of these names could be considered an exaggeration, however. This family, Dendrobatidae, currently consists of less than 200 species with well over 100 of these species being in the non-toxic* genera, Colostethus1. The brightly colored frogs in the genus Dendrobates are assuredly toxic but are not considered lethal, at least to humans. In fact, only three species of frogs in the five species genera, Phyllobates, were used to poison darts2. This use was also limited to the western Colombian tribes of Noanamá and Emberá Chocó3 whereas most arrow and dart poisons used by other tribes are plant-based curares from the Strychnos genus2. Over the last several decades nearly 500 chemicals have been isolated from dendrobatids4. These chemicals are in a group called alkaloids, generally plant-derived chemicals, which contain nitrogen rings. Alkaloids frequently have very strong effects when administered to animals. Nicotine, cocaine, morphine, and strychnine are all examples of alkaloids5. The hunt for these poisons began in earnest in the early 1960’s by Dr. Bernhard Witkop and has been joined by a number of researchers, primarily Dr. John W. Daly and colleagues of the National Institutes of Health. The work began with the discovery of batrachotoxin in Phyllobates bicolor and P. aurotaenia and quickly expanded to include several other major classes of dendrobatid alkaloids2. Currently there are 22 structural classes4. So what are these classes, what do they do to make them toxic, and where do they come from?

These structural classes are based on the number of carbon rings, the placement of the nitrogen atom, and other chemical components such as presence and number of hydroxyl (OH-), methyl (CH3-), or other side chains (R-, R’-). Five of these 22 classes are considered major classes and they are batrachotoxins, pumiliotoxins, histrionicotoxins, indolizidines, and decahydroquinolines. Some classes have many constituent alkaloids and may be widespread in dendrobatids6. Others may be limited in variety e.g. stereochemistry, or frequency. The batrachotoxins are highly toxic and found only in frogs in the genus Phyllobates and strangely enough in feathers of New Guinean birds in the genus Pitohui7. Pumiliotoxin and its subclasses are also very toxic and capable of causing death in mammals in high enough doses7. Indolizidines and decahydroquinolines cause locomotor difficulties in mice, while histrionicotoxins require much higher doses to elicit similar responses7.

The efficacy and importance of these chemicals is based on vertebrate physiology. Animal muscle and nerve cells act as miniature batteries. The cells utilize ions such as potassium (K+), sodium (Na+), chlorine (Cl–), and calcium (Ca2+) that, when not in a state of equilibrium within the cell, cause a slight electrical current. Embedded within the surface and interior membranes of these cells are ion channels and ‘pumps’. The channels can be opened and closed based on chemical imbalances or ion concentration gradients, and molecular occupation of receptor sites. Furthermore, the pumps can move these ions against concentration gradients. This complex arrangement is what allows nerve cells to ‘fire’ and muscle cells to contract and relax. Alkaloids, and dendrobatid toxins in particular, interfere with the channels and pumps in cell walls causing loss of function or hyperfunction of cells. For example muscle cells can twitch excitedly to the point of spasm and permanent contraction.