Batrachotoxin is one of the most toxic natural compounds known3. It has an extremely high affinity for the sodium channels in cell walls. The presence of batrachotoxin in muscle cells causes the sodium channels to remain open allowing an influx of sodium ions into the cell. The muscle cells, especially heart muscle, rapidly contract and remain contracted causing cardiac arrest within minutes7. Batrachotoxin is so toxic that it is estimated that somewhere between 100-300 micrograms (µg) will cause death in humans3. The average adult P. terribilis contains over 1100 µg of batrachotoxins8. Pumiliotoxin causes the release of calcium ions from within the sarcoplasmic reticulum, another membrane system within muscle cells. Pumiliotoxin also prevents the return of calcium ions to storage sites9. The effects of pumiliotoxin are muscle contractions, locomotor difficulties, salivation, uncontrolled chewing, and other such physiological responses7. Histrionicotoxins interfere with the sodium and potassium channels in muscle cells as well as acetylcholine receptors in nerve cells9. The decahydroquinolines block acetylcholine receptors in muscle cells. The effect, though very weak, prevents muscle contraction7. The effects of the indolizidines have been little studied but this large and varied class appears to effect, among other potential sites, nicotinic receptors in muscle and nerve cells7.

To fully utilize this cornucopia of chemistry each frog could contain dozens of toxins2. It was initially assumed that the frogs synthesized these alkaloids completely or from precursor enzymes8. Granular glands and their structure were discovered in a number of dendrobatid species and it was hypothesized that these glands could hold the enzymes to synthesize the toxins2. Over the years the hunt for the frog poisons posed a number of questions that eventually led away from this theory. Wild caught P. terribilis still had very high levels of batrachotoxin in their system over 6 years after their capture2. Captive born P. terribilis from the wild parents showed no batrachotoxin in their skins. The long time elapse after capture would certainly lead credence to the theory of frogs producing their own toxins. But why did not the offspring contain batrachotoxin? It had been known that different populations of frogs, even of the 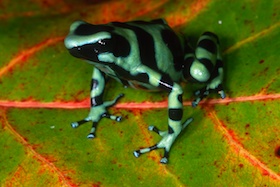 same species, had varying profiles of toxins2. Daly studied three populations of Dendrobates auratus from Panama and Costa Rica and found that although each population had its own fingerprint profile, variance could even occur on an individual level10. Additionally, it appeared the further apart the populations the fewer the shared toxins2. Daly then analyzed the toxins in a population of D. auratus introduced into Hawaii in 1932 and found a large profile divergence between the supposed founder stock in Panama. In fact, the Hawaiian population was completely lacking in some of the major alkaloids from the Panamanian stock10. More extensive studies of captive raised animals of a number of dendrobatid species failed to detect any alkaloids10. When some of these captive animals were raised in outdoor terrariums they did produce profiles similar to the wild stock of the same locale but at reduced levels.