By the early 1990’s the problems began to point to a dietary component to the poisons. Daly fed fruitflies dusted with isolated alkaloids extracted from the skins of wild frogs and found that these chemicals were taken up into the skins of the captive animals in the genera Dendrobates, Epipedobates, and Phyllobates11. The alkaloids were not detected in internal organs and tissues, however11. Furthermore, Colostethus frogs did not take up these alkaloids, a mirror of their wild life lack of toxins. These results provided some answers to results seen years previously. This discovered uptake system could show how wild caught animals could maintain their alkaloids for many years. It also showed that the frogs were immune to chemicals that are toxic to other animals, an expansion of an earlier observation that tissues from frogs in the genus Phyllobates showed no reaction to the presence of batrachotoxin8. 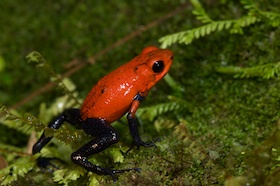 So now the thought was shifting from internal synthesis to dietary origins and those origins needed to be discovered. Some of the lesser dendrobatid alkaloids such as pyrrolizidines, indolizidines, pyrrolidines, and piperidines had been isolated from ants and other lesser alkaloids were found in certain beetles and millipedes but none of the major classes had been detected in arthropod prey12. Daly still considered the possibility that the frogs were ingesting building block chemicals and that further synthesis was occurring12. Daly and colleagues investigated further by capturing Dendrobates auratus tadpoles from a population in Panama and raising them. The metamorphed frogs were fed leaf-litter arthropods collected from a second locale in Panama while control frogs were fed flightless fruitflies. When they were later sacrificed it was found that the frogs raised on leaf-litter insects contained a significant amount of alkaloids while the control frogs contained none12. Interestingly the frogs showed alkaloids profiles similar to the frogs from the region from where the leaf-litter was accumulated and not from the parent stock of their collected location12. In time a short list of minor alkaloids shared between dendrobatid frogs and arthropods was generated13. Unfortunately, this list, as of a 2000 published study, only consisted of 22 of the near 500 dendrobatid alkaloids. These studies are certainly pointing to a dietary source for the vast array of chemicals, but where are they coming from? Hindering the search is the fact that arthropod fauna are extremely diverse and tiny or microscopic. The most recent published progress by Daly and colleagues examined arthropod collections from a number of sites in Panama and extracted the alkaloids. While the arthropod taxa were too diverse to isolate the exact source of the extracted chemicals the researchers were able to detect two of the pumiliotoxins and an indolizidine, both major classes of dendrobatid toxins4. These data are showing promise that bioprospecting of arthropod taxa will reveal the sources of many, if not all, of the dendrobatid toxins. Interestingly, as dendrobatid toxins have been found in frogs and toads from Madagascar, South and Central America, and Australia14, 15, & 16 as well as the previously mentioned Pitohui bird from New Guinea, the arthropod source puzzle should shed some light on the broader puzzle of evolutionary theory.

* Colostethus inguinalis was shown to contain the potent toxin tetrodotoxin in its skin17.