But the reality is phyllomedusine frogs are way cool, even with an over-saturated representative red-eye species. They are called leaf frogs because most of the species are arboreal and spend their time high up in vegetation and trees excepting to breed. They are also called monkey frogs for their habit to walk and grab, much like monkeys through trees. In recent years there has been much taxonomic work on this monophyletic group of frogs. In 2005 Faivovich, et al., showed that the subfamily Phyllomedusinae was part of the Hylidae family and allied with the Australopapuan subfamily Pelodryinae. 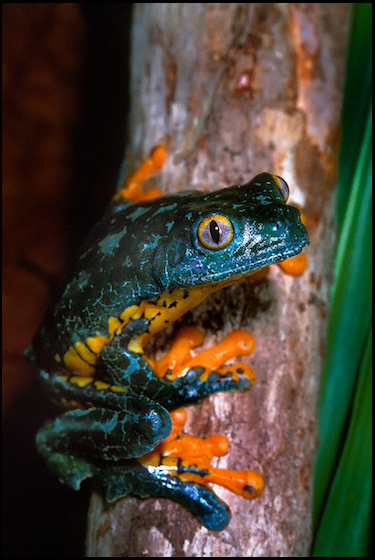 Cruziohyla craspedopus is one of the most stunning of New World hylids and represents one of two species in this genus.

However, uncertainty resided within the family as to species relationships and the monophyly of genera. Faivovich’s review of Hylidae was limited in the sampling of phyllomedusines and supplied another set of questions as to species relationships. In 2009 Faivovich, et al., addressed a number of these questions in a broader study of phyllomedusines. Currently there are about 60 species of phyllomedusines and this recent study included 45 species for genetic comparison. Additionally the authors examined a number of physiological traits in their hope to sort out the relationships both within the subfamily and more importantly in understanding anuran evolution.

Unfortunately, most of these 60 species of leaf frogs reside within the expansive forests of Brazil; a country I’ve not had the pleasure to extensively explore. But there are 7 genera (or 5 if you accept the recent Faivovoch proposal to include Pachymedusa dachnicolor and Hylomantis within Agalychnis) and their ranges extend from Mexico throughout South America so there is plenty of range and diversity to explore. They inhabit lowland tropical forests as well as dry savanna forests. And while most of them are arboreal there are a few species that oddly, at least for this subfamily, appear to be terrestrial. Unfortunately, little is known about most of these species as their ranges and distribution is limited. But there are a few ‘flagship’ representatives that shed some light on their biology. 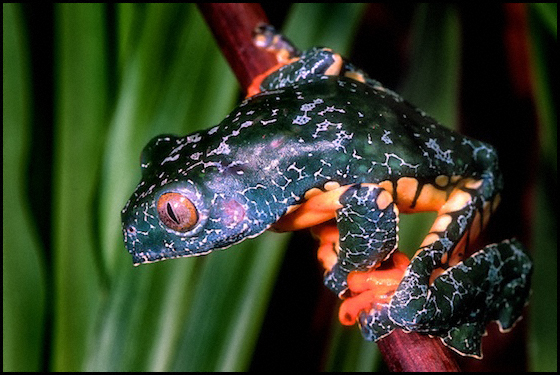 Faivovich, et al., in 2005 separated Agalychnis calcarifer and A. craspedopus into the new genus Cruziohyla based on morphological and genetic traits. In their 2009 paper this genus along with the southern Brazilian genus Phrynomedusa appear to be sister groups to all the other phyllomedusines. Agalychnis craspedopus is considered one of the most spectacular hylids and tops many peoples’ wish list of must-see, and unfortunately must-own, frogs. In fact I told Bill Lamar that this was my wish list frog on my first trip to Peru in 2001. Thankfully, Greentracks delivered because one of our first nights in the forest we found 2 males and a female at a hollowed out tree stump in a palm swamp. Inside the stump were tadpoles. Hanging off fallen sticks was a fresh egg mass and the jelly remains from a prior egg mass. This stunning frog lives up to its hype. This breeding habit of using tree hollows, along with the bright bi-colored iris, and the striking coloration are some of the physical traits that put this and its sister species, C. calcarifer, in the new genus. The distribution of C. craspedopus is throughout the Amazon basin while C. calcarifer runs down the Atlantic slope of Central America from Nicaragua through Panama where it jumps to the Pacific slope and continues along the coastal forests of Colombia and Ecuador. Despite the great range of C. calcariferit has an extremely patchy distribution, likely the result of habitat degradation, but also potentially subject to chytrid infection, specialized habitat needs, and hopefully under reporting. Many of its known localities are gone or diminishing. 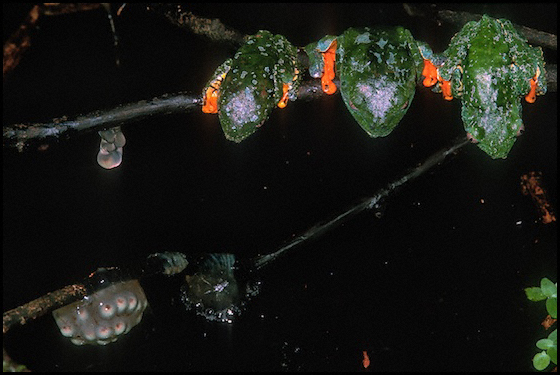 Two male and a female Cruziohyla craspedopus rest on a twig over a hollowed out tree stump. Jelly masses, some with eggs and some previously hatched, remain while tadpoles swim in the water below.