And not far from here we reached the little gully where we found the C. calcarifer and also A. lemur. It’s an incredible sight to be standing on a hillside in the dark and spinning around to spy both of these species, like hidden gems, clinging to vines or sitting on leaves. And more eggs. Members of the genus Agalychnis generally lay their eggs on leaves overhanging water. The eggs or tadpoles that don’t become snake food hatch and wriggle out, dropping into the pools below. And in the pools you can note the leaf frog tadpoles by their practice of floating upright, tails down. 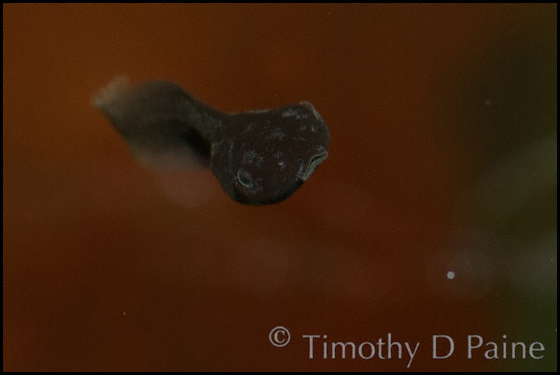 An Cruziohyla calcarifer tadpole surfaces for a gulp of air within its small pool of water in a tree hole. The splotchy pattern that will show as an adult is already starting to show. 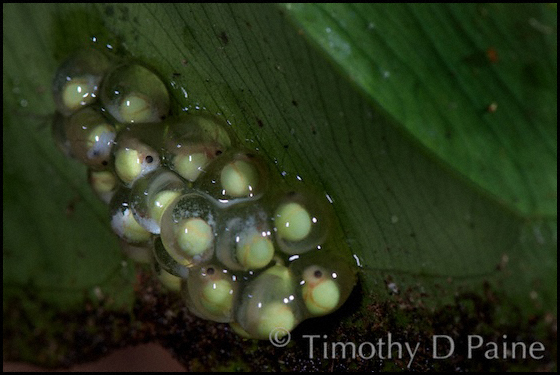 Embryos are starting to develop on this clutch of Agalychnis lemur eggs. If they make through hungry snakes and parasites little tadpoles will wriggle free in a few days and drop into water below.

So if you want an awesome chance to see 5 amazing species of phyllomedusines, then contact Brian Kubicki and arrange for a visit. After all he did write the book – Leaf Frogs of Costa Rica. And if you are new to traveling or have never been to Costa Rica but have wanted to, and you are interested in frogs and captive husbandry then consider attending the Sustainable Amphibian Conservation of the Americas Symposium in August 2013. Hosted at CRARC with various trips into the field and an incredible speaker lineup this is a great chance to learn about amphibians and see some of Central America’s coolest amphibians.

Back to my leaf frogs. So far I’ve pretty much summed up my Central American leaf frog experience. But I’d like more. Even though there are several other species occupying this vast land bridge I really want to see two others: and those are my missing Costa Rican species, Agalychnis annae and the critically endangered A. moreletti functionally only found in El Salvador and Guatemala with smaller populations in Mexico, Belize, and Honduras. I’ve seen both of these species in captivity and am enamored by the yellow orange eyes of A. annae and the deep deep red, almost black, eyes of A. moreletti. 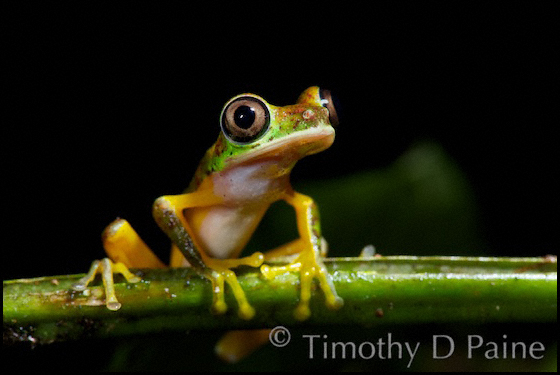 The frail looking Agalychnis lemur as it rests in the forests of the Costa Rican Amphibian Research Center.