A series of shots trying to cover the full range or dorsal scale rows. Marking a reference scale from frame to frame should allow a complete count of rows. Should.

With this first red snake I returned home to find out about Drepanoides and Pseudoboa. Actually, I had heard of these snakes before but not having caught any what little familiarity I had had leaked out of my head. Limited photos out in the domain were useless in helping me confirm my identification. That is when I learned that Drepanoides had 15 midbody scale rows, Pseudoboa 17, and Clelia 19. All of these snakes had the same red body with a white collar and black face. There are some snakes in the genus Oxyrhopus that are similar looking but I’ve caught a few of these. Their red eyes and usually some other form of black patterning separate them – at least at my skill level. No, I’m stuck between these 3 species. So once at home I call up a series of close up shots taken around the mid body. I mark a uniquely patterned scale as a reference point and can count scale rows. These snakes are not much thicker than a finger. And they are not cooperative so counting scales on a writhing snake is useless. This is why herpetologists use a lab scope on euthanized specimens to get their counts. I’m not collecting or harming my specimens so that is out of the question. My system can work but it is not ideal. If I can’t find a unique scale to reference then it is hard to piece together the count from multiple frames. On the other hand I can get high resolution close-up shots of heads and get detailed head scale counts. On this first animal I get 15 midbody scale rows. And determine my first Drepanoides. I return to this location in 2010 and get a mid size adult Clelia. No sign of red despite the fact that I know this species gets twice as big as the ‘adult’ I’ve caught. 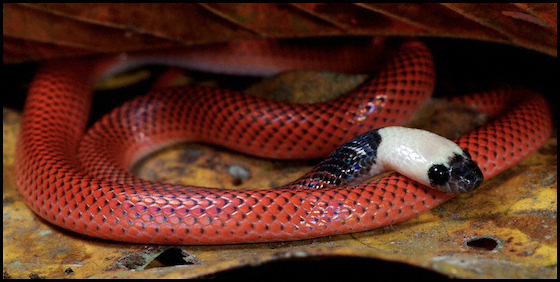 My second of the problem red snakes. Found at Sani Lodge, Amazonian Ecuador 2010. Despite having a more round head and proportionately larger eyes this snake had 15 dorsal scale rows – Drepanoides anomalus.

Later in 2010 I returned to Sani Lodge cooperative on the Rio Napo, Ecuador. Here I had caught my second of these red snakes. I was pretty sure I had something different because the white collar was more defined and cleaner that the previous snake. But that is not what got me. This snakes head had a different ‘feel’. It was rounder, with the eyes bigger proportionally and facing more forward. Just based on this feeling I figured I had caught a juvenile Clelia. In fact that snake is posted in a previous blog entry as such. But I wasn’t convinced. Another reader suggested that the snake was actually Drepanoides as well. I went back and check my notes and I had an unconvinced count of either 15 or 17 scale rows. Checking photos it appears that the snake is also Drepanoides. Despite have a different gestalt, based on scale counts, it appears to be the same species. 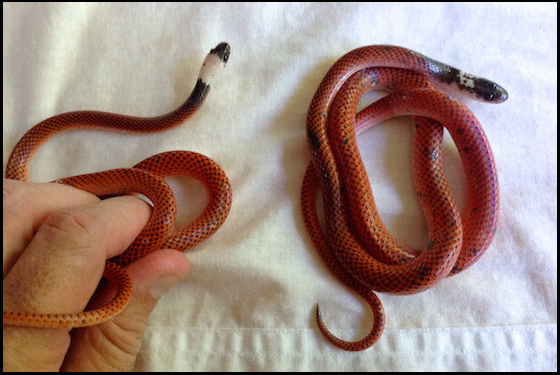 Found 15 minutes apart in Ecuador the one on the left was found climbing through a tree 3 meters up while the second was found crawling across the trail. This phone camera shot shows the differences in head shape that led me to believe I had 2 different species.

A couple months ago I returned for 2 more weeks at Sani Lodge to help out with another herp survey and do some trail mapping. One of the nights I went on an all-night hike covering some 17km. Soon after midnight I had seen a lifer snake and was riding a high when we observed a red snake (white venter) about 3 meters up in a tree. I pulled him down and noted that it looked just like my last red snake here. But being up in a tree I thought I had possibly caught my first Pseudoboa. About 15 minutes later another red snake crawling slowly on the trail allowed a side-by-side comparison. This second snake looked markedly different from the one just caught. The second red snake looked just like the the misidentified Clelia-to-Drepanoides from Peru 2009. So I figured I had Pseudoboa and Drepanoides, but more importantly I could compare them directly and get a subtle feel for their respective differences. Feeling smug I posted a quick cell phone shot to the AmphiBios Facebook page from the field. I expected people to key in on the similarities in color and pattern and overlook the subtle differences in head shape. I made midbody photo series and closeup head shots for records but felt confident in my field identification. That is until I got home to count scales. My field counts (rough) were confirmed, sort of, by photos. The first rounder headed snake had 15 midbody scale rows. That conforms to Drepanoides not Pseudoboa. Unfortunately I got a bad series of dorsal scales of the second. I had a rough field count of 17 but didn’t feel confident. At home I kept coming up with 15 but I am not absolutely sure that it is correct. There is a slight chance that there are 17 scale rows. The only Clelia species I know of in western Amazonia is C. clelia and it has 19 scale rows. Had I taken a shot of the subcaudal scales I could confirm or rule out Pseudoboa (single subcaudals in Pseudoboa as opposed to paired in the other species). So I’ve caught 4 of these types of red snakes with 2 distinct types of look. 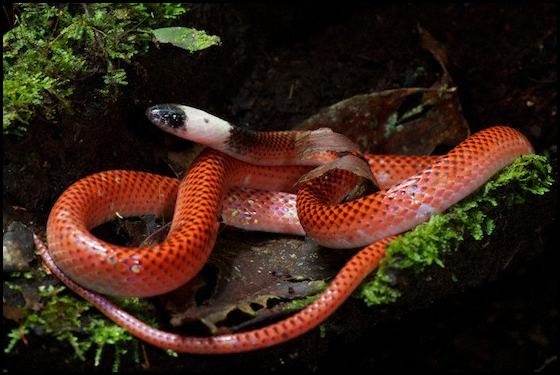 This posed photo of the first snake found at Sani Lodge in 2012 better shows the head and the resemblance to the animal found here in 2010. 15 dorsal scale rows. 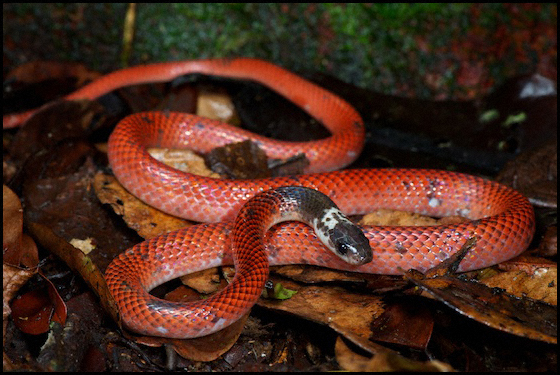 This shot of the second of 2012’s two red snakes shows the resemblance to my first animal found in Peru, 2009. Photo counting of scales was inconclusive but probably 15 scale rows.

Could it be that these 4 red snakes are the same species? Is it that I keep catching Drepanoides, the harmless red aposematic snake that does not mimic any coral snakes? So while simple biological hypotheses suggest that red in snakes means danger that is not what confuses me. Are these other red snakes really mimics? I’ll let others more qualified sort that out. I’ll just appreciate the beauty of these misunderstood animals. So back to the field to search for more of the dangerous red snakes and get my photographic act together so I have a decent chance to identify these guys. Please feel free to comment of characters or suggestions for better identification. 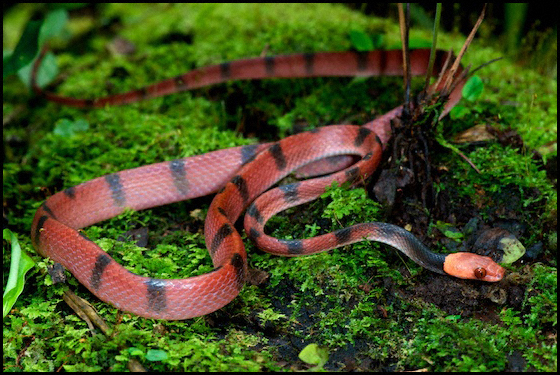 Maybe the king of red snakes is Siphlophis compressus. This beauty features a deep red body with a bright red/orange head and red eyes.