Micrurus lemniscatus is one of the more common and widespread Amazonian coral snake species. As you can see in this triad repeating banding pattern, the red bands and yellow (sometimes white) bands do not touch. This snake is exhibiting a defensive display by hiding its head while raising the tail.

But what happens when you look for snakes outside of Florida? If you start herping Mexico, Central America, and South America you realize that red snakes start showing up more frequently. Even if you don’t have the time or skill to catch all the variety of red snake species you will find the lesson you just learned start to fall apart. Flip through the pages of Campbell and Lamar’s, Venomous Reptiles of the Western Hemisphere or Roze’s, Coral Snakes of the Americas and you will see that the simple monad pattern from the above model/mimic falls apart. That’s because there are about 70 species of coral snakes in the Americas. Some are nearly solid colored. Usually red is the primary color, sometimes the yellow is replaced with white, and sometimes the red is really orange. Some of the coral snakes will contain bands of just two colors. And some replace the simple alternating monad banding with trickier triad banding where 3 bands of black are separated by 2 white or yellow bands in the middle and bookended with red bands before the pattern repeats. Now add a dozen or two relatively harmless species of snakes containing some amount of red that may or may not mimic conspecific coral snakes and the simple lesson gets muddy. 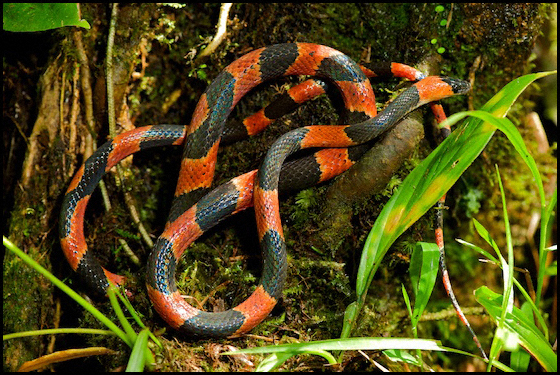 The genus Oxyrhopus contains several species that resemble coral snakes. Their long pointed heads and disjointed patterning quickly give them away as harmless mimics. This O. petola was found in Costa Rica but I’ve caught several similarly patterned specimens in South America including a solid black individual a couple months ago in Ecuador.

So it is somewhat easy to come up with a biological model when you look at a limited system and exclude the greater body of organisms over greater geography. But in biology it would be foolish to hold statements based on 2 species in one region while ignoring all of the other organisms related and not over the entire distribution of the intertwined families. So now we must go back to our original premise of aposematism – that brightly colored animals, including red, represents danger. Red color in snakes may seem common for readers of this site. I’ve included red in snakes before but in the ‘Old World’ or eastern hemisphere red color in snakes is rare. So what drove the evolution towards red on this half of the planet? If Batesian mimicry were true, at least in the simple way described above, then why don’t all red snakes mimic a local coral snake variant? Why are not all venomous snakes brightly colored? Is it the (relatively) small size of coral snakes that makes them susceptible to avian predators the reason for being red (mammalian predators are color blind)? If so then why are so many of the models nocturnal where red color is useless and avian predators are sleeping? In fact these types of questions are what caused scientists to think of another mimicry system to describe the relationships between dangerous coral snakes and the relatively harmless red snakes that coexist. And I’ll not go into it here. 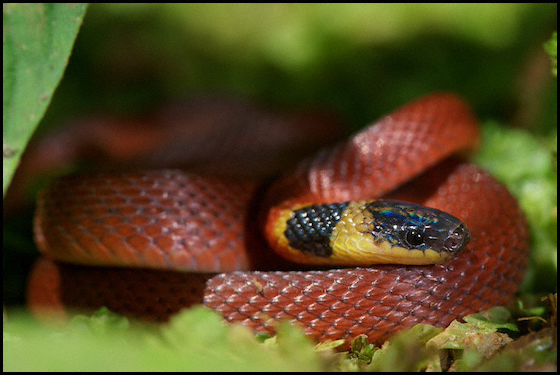 The small size and relatively small heads of the coffee snake, Ninia sebae, can certainly confuse it for a dangerous coral snake, especially when they have black banding, which this animal lacks.