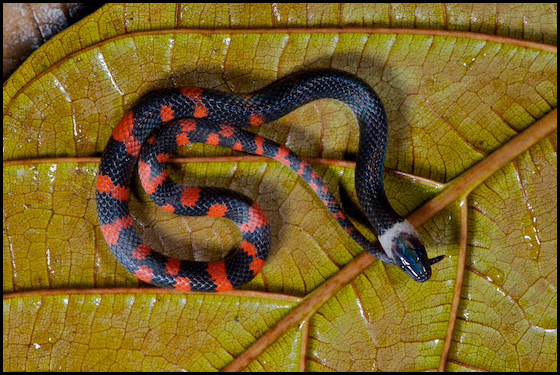 These small earth snakes, Geophis brachycephalus, can be confused with coral snakes to the uninitiated. The confusion mounts when the snakes are fleeing which makes identifying the patterns more difficult.

Where I have found difficulty is trying to identify a group of red snakes that are completely unrelated to each other. These snakes are almost solid red with a black face mask and a white nuchal collar. There are a number of similar looking snakes but most have some sort of character that makes them easy to separate from each other. And certainly easy to separate from coral snakes. In the western amazon there are 3 species that to the best of my research are nearly identical. Internet and published photos are lacking and not good enough to get a good feel for the differences. So I have been hoping that in time I would catch enough of all 3 species that I would be able to identify them based on ‘feel’. The snakes are (forgive the lack of common names as like most herps there is no established common naming system) Drepanoides anomalus, Pseudoboa coronata, and juvenile Clelia clelia. C. clelia are a common snake extending up through parts of Central America. As adults they are a solid plain grayish/black color. They are known to get quite large and feed on other snakes, including dangerous vipers of which they possess an immunity to venom. But as young snakes they are bright red as described above. I’ve seen adults but never an intermediate stage that would suggest I’ve found one in the process of going from predominantly red to the near black adult color.

A subadult Clelia clelia has lost all juvenile red coloring and taken on a near solid black color. These large snakes can approach 3 meters long and feed on other snakes including highly venomous vipers.

I was first piqued by this trio of species when in the summer of 2009 I was herping in southeast Peru at Los Amigos Biological Station on the Rio Madre de Dios. I was coming in from a long night of hiking when I found a smallish bright red snake calmly crawling across the trail. I had known about Clelia being bright red as young so figured that was what I caught. Thankfully I took some full body shots so that I could do scale counts when I got home. Scale counting is the arcane and tedious task herpetologists use to identify snakes when individual variation or species similarity makes identification difficult. Or it helps identify something that may be new to science. And in deep Amazonian forests that is a very likely possibility. Snakes may have a wide variation in color and pattern, both in differing age classes, as well as within a population. But the number of type of scales are usually pretty stable. The number and size of scales covering a snake’s head is a somewhat unique pattern. Additionally, the number of scales that wrap around a snake from one side to the other is fairly consistent within a species. One counts the overlapping rows of scales at a point midway down a snake’s body. This is known as the midbody scale count. The types of ventral, anal, and subcaudal scales, when taken in conjunction with locality, pattern, and other characters will usually rule in or out any other species. 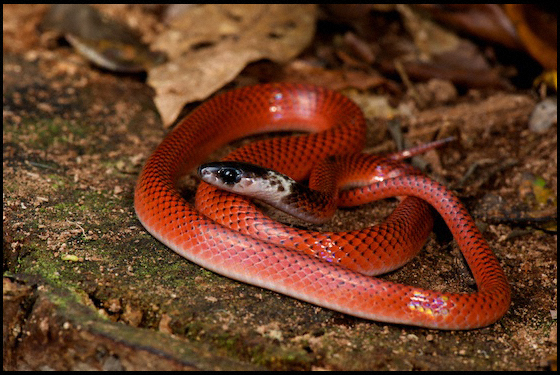