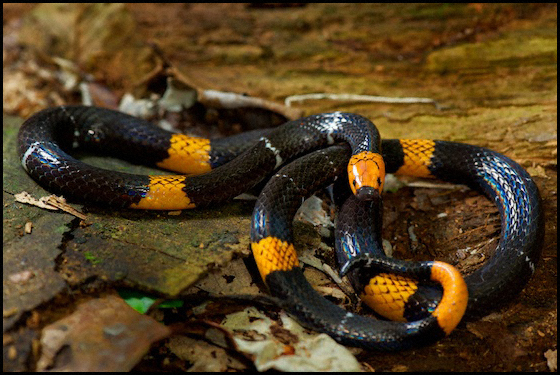 This smallish and uncommon coral snake, Micrurus hemprichii, has a triad pattern but the white bands separating the black bands is minimal and red bands can be a striking orange color. This animal was found in southeastern Peru near the Bolivian and Brazilian borders.

I suppose many of you are not going to put much thought in these issues and will come to the conclusion that it’s just best to avoid any snakes with red color to them. Not a stretch considering snakes of all colors and patterns are usually feared. But what are us hapless herpetologists and photographers to do? We must look for snakes. Once found we must examine and photograph them. This usually means some sort of capture or manipulation. Most of these snakes are quick to flee and certainly rarely cooperative. Sometimes identification, late at night as a snake bolts through leaf litter, can be tricky to say the least. A couple months ago I was certain a rapidly fleeing brownish snake going through the vegetation and leaf litter was a harmless colubrid. I was close to grabbing it because I was going to lose it. But I knew I had been hiking for hours, it was late, my headlamp was only partially effective dashing through the dark jungle after a fleeting image. I hesitated enough to confirm identification, risking losing the snake. When it finally froze enough for me to see what I had, I was shaken to see it was a potentially deadly fer-de-lance. Close call. But even by human standards I’m not a normal predator. That same evening I had already bagged 2 snakes for a later shooting session. I didn’t hesitate on them because they were red. I recognized that solid red colored snakes are generally harmless, especially when one is a few meters up in a tree. So how does one differentiate the harmless red snakes from the potentially lethal coral snakes? 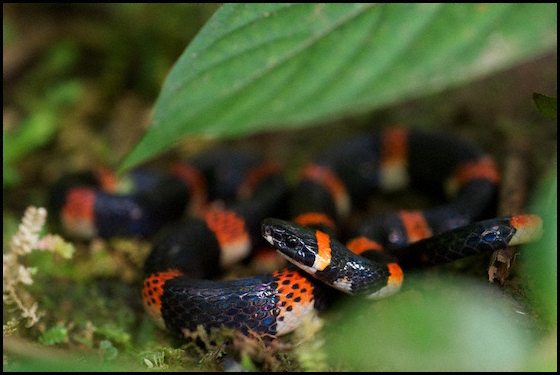 I’ve discussed snakes from the genus Urotheca in a previous blog entry. This U. euryzona can be confused with the bi-colored banded Micrurus multifasciatus with which it shares habitat.

There are a number of subtle cues to look for. Generally coral snakes have a solid banding pattern that wraps all the way around the body. Pretty useless for a snake on the crawl. Coral snakes usually have a clean banding pattern as opposed to the less distinct bands of mimics. I say usually but I don’t recommend betting one’s life on usually. Coral snakes usually have heads that are not as differentiated from their bodies, unlike most colubrids which tend to have defined bodies, necks, then heads. Coral snakes also usually have smaller eyes located more dorsally than colubrids. Thats a lot of usually’s and most of this is useless when only getting glimpses of a snake moving through leaf litter. Of course it takes a bit of field time and lots of snake captures before one has the skills to make these differences on the fly. And by then one usually knows the species, if not the genera, just based on familiarity. After you come across large numbers of a particular taxa or the variation found within a species one can usually identify it based just on it’s ‘look and feel’ – that is the gestalt of an animal. It reminds me of a time I overheard a professor teaching a class about desert lizards. She had a desert iguana, Dipsosaurus dorsalis, in hand and was showing the identifying characters. I thought it odd because to me it’s a desert iguana because it’s not anything else. In other words, I couldn’t confuse it with any other lizard. So in short it’s almost easy to identify the red snakes, or at least separate them into coral snakes and all others. Well, almost easy once you know what you’re doing. 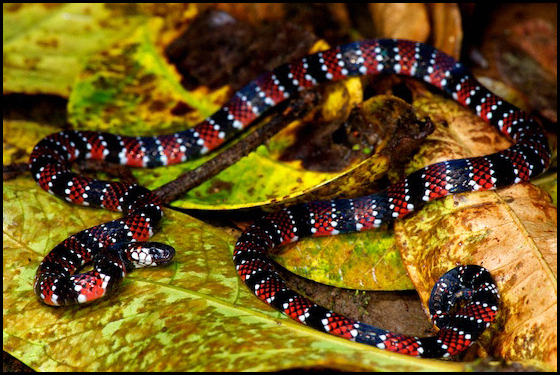 Despite only seeing a couple inches of the body underneath the leaf litter late one night I immediately recognized the pattern of this ornate coral snake, Micrurus ornatissimus.