So we continued on our journey that night. Ironically, I almost met another sister that night. Atropos (also another generic name for a group of venomous snakes – Atropoides), nearly cut my thread as I chased an unidentified brown snake through some bushes. Frustrated and tired I nearly grabbed the snake mid body for fear of losing it. But at the last second, spared by the shears of Atropos, I hesitated, recognizing that I had not identified this snake. A minute later when the animal stopped its flight I saw that it was a young Bothrops atrox, a jergón in local language. This snake would have made me pay dearly for my folly. Lesson learned. 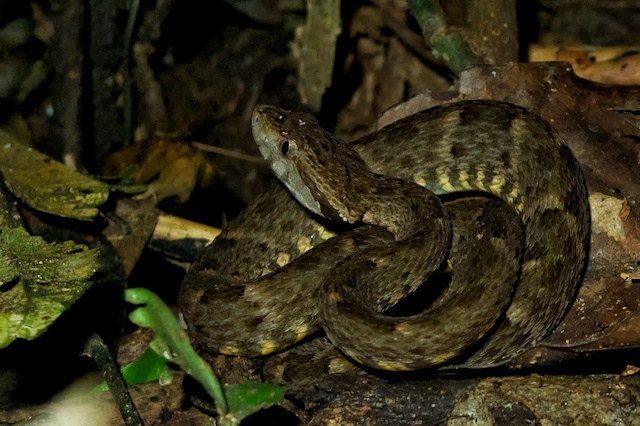 Lesson: don’t grab unidentified brown snakes fleeing through bushes late at night. They might turn out to be the deadly lance head, Bothrops atrox. Bothrops are also known as jergón in some regions of Peru and Ecuador.

Later, back at camp, all of the local people congratulated me on finally seeing this fearsome snake. I implored Javier to get word out that the snake was on the seldom used trail and for people to use caution. But more importantly this snake, a snake I searched for well over 10 years, was worth saving. I came all this way and spent all this time and the fact was, I found it on their land. In their home. That was worth something. The people were proud of this accomplishment on their land. And I think maybe I just made the slightest difference in saving this majestic snake.

But now what? What tales do I tell the unsuspecting travelers? Never one to give a short answer (or write a short essay) I retell the bushmaster story. But I add that she is merely one of many legendary snakes on my hunt. After all, there are lots more species to see. Many have the status of fear and terror. Some of legend. And there is the need to capture the essence to this snake. So I continue with the hunt and with the stories. I need to share and educate. And in return the fates grace me. Last month while hunting and teaching tropical herpetology with my friends at PrimatesPeru in southeastern Peru another shushupe was captured. Patrick Campbell is the volunteer coordinator with CICRA at the Los Amigos Biological Station on the Madre de Dios river. Word got out this evening that a large ‘boa’ was found. Joined by videographer and snake wrangler, Myke Clarkson, on hand working on a Discovery Channel project, they found the boa which turned out to be a beautiful bushmaster. Luckily they captured it. 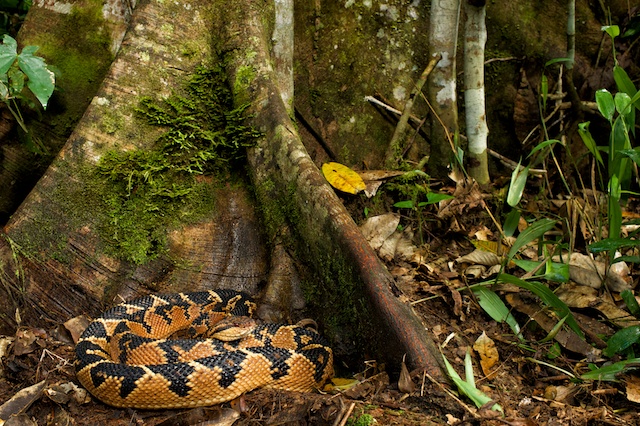 A 2.1m Lachesis muta, from southeastern Peru. My second bushmaster and one afforded better photo opportunities. How do we know it was 2.1m? We measured it of course. 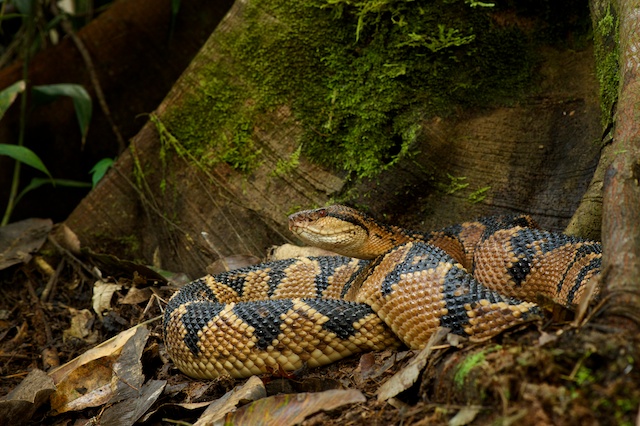 A large Lachesis muta was patient and docile enough to be posed by a group of photographers for more than an hour. Conditions were not perfect but good enough to capture some of this majestic animal.

I, on the other hand, was out looking for more needles in haystacks. On this evening, one of my last nights on this trip, I was out with Toni, one of my most herp minded and attentive students from this field course, where we found an arguably even more exciting find. While walking through the swamp we came across a jergón of great rarity – a Bothrops brazili. The Amazonian lance head Bothrops atrox is a relatively common snake. B. brazili is not. In fact it was one of the snakes to replace my #1 since finally seeing Lachesis.

The yellow tail tip of Bothrops brazili is used to lure unsuspecting frogs and lizards to their doom. Adults, which feed primarily on birds and mammals, do not use caudal luring. 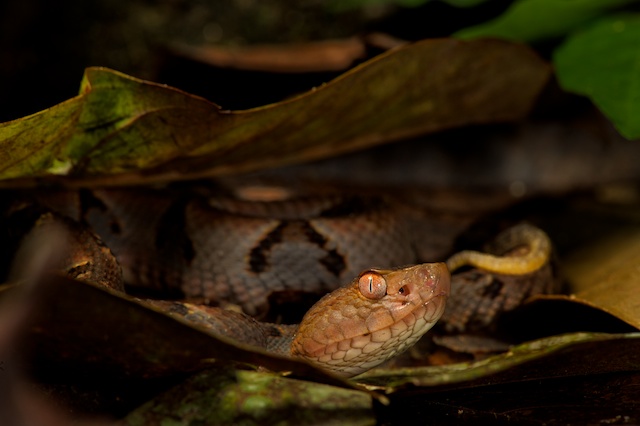 Another glimpse of the rare lance head, Bothrops brazili, showing the characteristic pink eyes and the lack of a post-orbital eye stripe.

A few had been found recently around the station; all juveniles, leading me to believe a birthing and dispersal event had taken place recently. This was my second of the trip; Myke spotted the first as it scrambled over and between my boots as a I gazed down into the swamps below on a careless night. It happens. Snakes were very rare this trip. I was being treated to cruel fate in numbers. But magic was happening none the less. I was searching for rare needles. But I couldn’t even find the haystacks. But it’s all good. I trust that Clothos, the third Sister, had graced me with the finest thread. Lachesis has been kind with her quality, and as long as Atropos allows, I will search for these needles in haystacks and tell the world my stories and keep the pictures coming. So I was able to capture a little more of that all important snake essence. And I got to teach some more. And a lot of students will return home from their one and only week in Amazonian rainforest and tell people; oh bushmasters? yeah I saw one on my trip to Peru years ago. Fate. 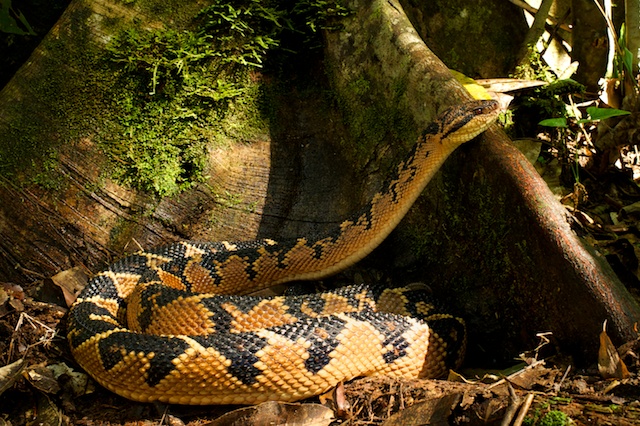 Tired of the photo session, this bushmaster decides it has had enough of photographers and moves on. 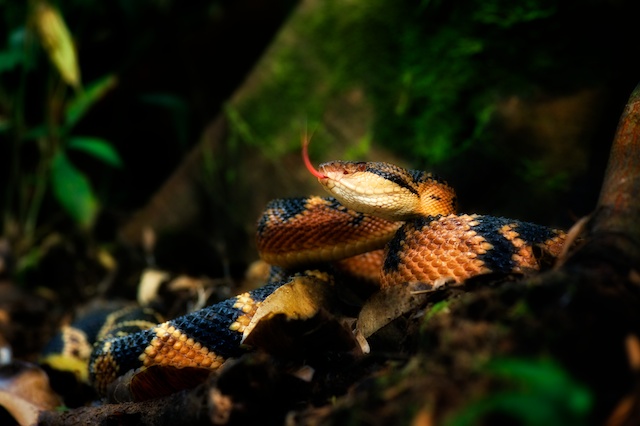 A heavy artistic touch of my second Lachesis. Now time to add more snakes to the #1 spot. Or I could just go looking for the other 3 species in the genus.