Snake hunting is a slow go. At night, snakes are camouflaged sleeping, or slowly crawling in vegetation. Sometimes, like this night, a couple bright red Drepanoides would be easily seen and caught. But you don’t just put your head down and hike. You are scanning everything. You are looking for something new and exciting, be it a tiny frog, and amazing insect, or a mistaken leaf or stick. I’ve taken an hour to go a couple hundred meters. So this would be a long and tiring night. But the fates were determined. Just after midnight, Javier ahead of me, jumped and ran back towards me yelling. I was startled and first thought he was chasing something to me. I yelled “what?!” but couldn’t understand his response. After another failed and confused response from him I walked forward to see, and now understand, his reaction. Shushupe! There it was!! A grand coil 3 loops deep. Its head raised high, as big as my fist, which immediately snapped to look straight at me! I immediately started shaking from excitement. I was standing 2m from a snake that could have easily been 2.5m long. And its bite could prove fatal in an hour. I immediately started giggling and didn’t know what to do with my excitement. Javier wouldn’t come within 3 or 4 meters of me, and even then stood safely behind me. But he too was excited and was congratulating me. My first bushmaster. 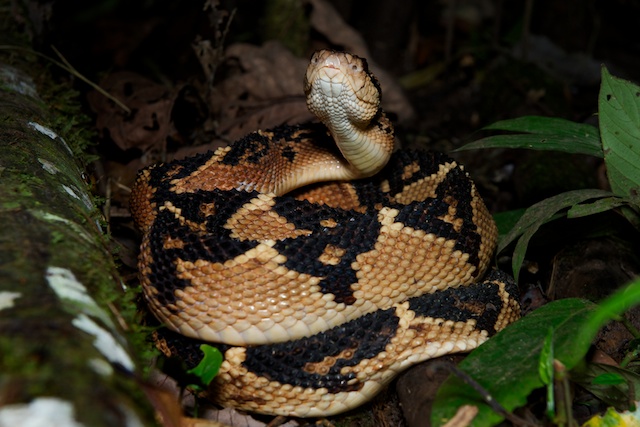 My first bushmaster, Lachesis muta, from Ecuador. Also known as shushupe this very large and alert snake made sure to keep an eye on me.

It took a minute or two to calm down enough to ask myself, what now? Long snake hunts at night, frequently punctuated with rain means that I rarely take camera gear when I’m in hunting mode. Of course, this also means that I’ll like see something amazing that I can’t document. For sure many amazing experiences in forests only exist within my mind. I’m happy with that. My obsession to capture every moment as a photo has caused lots of grief, and usually was a failure. So I am now content to know that some things in life will only be my memories. But I did have a camera with me this night. Almost as a tease I had my trusted Nikon but only a 24-70mm zoom and an on-camera flash. This meant I had to get close, and the lighting would be crap. But I could at least get some shots. Of course it wouldn’t be that easy. The snake was hunting just behind a log. No doubt it knew that the log was used by mammals other than locals to cross the 25m wide swamp. So it lay there waiting for something to cross right in front as an easy meal. But I needed that log. The ground around three sides of the snake was soft mud. I’d sink up to my calves, unable to quickly move or maneuver. A fact that was quick to make me question what I would do if the snake chose to pursue; I couldn’t flee! Behind the snake was vegetation. So I was trapped by circumstance and inexperience. I dared not molest this snake in hopes of getting a better picture. But I couldn’t safely approach. And there was this confounded log in the way. As I tried to move back and forth looking for an angle I realized this snake was aware. Acutely aware of me! It would snap his head to and fro always looking straight at me. Unnerving to be sure, but also difficult to try to photograph the profile of the snake. Head on shots don’t work so well, not with this kind of lighting. Damn you fates, I was being thwarted. But I persisted. I would try to distract the snake (yeah, dangerous as it sounds) to get him to look at another part of me – Javier was having none of my nonsense. And I slowly crept up, stuck in mud, near on my belly, to less than a meter away and took my photos. I can’t say I’ve ever been as nervous with a subject. I didn’t get my usual chance to bond with the subject to understand its demeanor. Would this guy snap and charge me? Would he allow me and my lights to poke and prod around? I tried to think of ways to make this better. Could I catch the snake? How? Where would I put it? Could there be a way to find it later? If I tried any of these follies would I die? I decided my fate was to be content with my snapshots and wait for another time. Another chance at shushupe. Hopefully my thread is long and Lachesis had more in store for me.

It took some work to get some acceptable snapshots of my first bushmaster. Here he is in profile next to a log he was hunting for passing mammals. 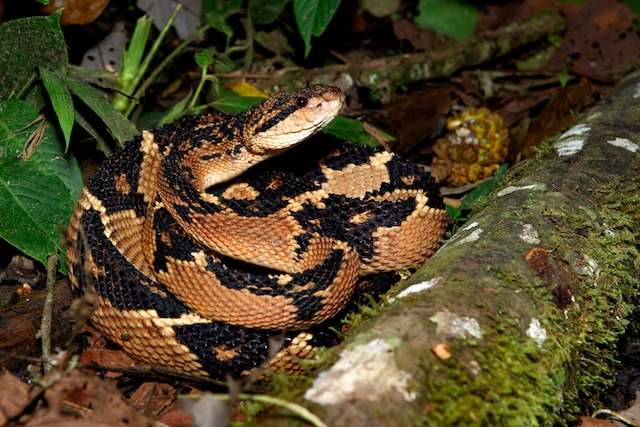 One can near make out the full size of this snake. Its body girth was thicker than my arm and head was larger than my fist – I estimated it to be approximately 2-1/2 meters long.