The aquatic garter snakes, Thamnophis atratus, in Marin County are an intergrade between the northern and southern subspecies.

The third Pt. Reyes (and SF Bay region) garter snake is the aquatic garter snake, T. atratus. There are two subspecies locally, from San Francisco southward is the Santa Cruz garter, T. a. atratus and north up the coast is the Oregon aquatic garter, T. a. hydrophilus. Immediately to the north of SF, along the Pt. Reyes region there is an intergrade zone between these two subspecies. The southern subspecies has a more defined dorsal stripe, which can be a bright yellow to orange color while the northern subspecies can have the stripe lacking with the dorsum becoming more blotched in darker coloration. This species can be mistaken for coast garters lacking red coloration and in those less common cases you would have to revert to scale counting. Luckily there are usually enough color cues in our local snakes to separate the species fairly readily. The aquatic garter snake prefers to spend its time in or about waterways. This includes the ponds and marshes around Pt. Reyes but can also include lakes, streams, creeks, and rivers where you generally won’t see the red-sided garter, T. sirtalis. The aquatic garter is often seen basking on shorelines where it will readily flee into the water if disturbed. This likely warms the snake enough to engage in its cool water hunting strategies where it prefers to take fish, tadpoles, and amphibians. It will feed on other prey but generally this feeding strategy coupled with its location will identify the species.

It is not often you find three closely related species of snake living in sympatry. While garter snake taxonomy shows at least two distinct clades within the genus, their ecological roles greatly overlap such that these three species definitely compete with each other. However, the astounding wildlife diversity surrounding the San Francisco Bay Area, especially the Pt. Reyes region allow each species to utilize its generalist lifestyle and carve out its own natural history niche. If you are a San Francisco Bay resident head out to your favorite park or open space preserve and look for these harmless beauties. Otherwise, if you are a living or visiting the Western Hemisphere, it shouldn’t be too hard to locate any one of the many widespread species of spectacular garter snakes as they are found almost anywhere. And if you happen to be around Pt. Reyes marveling at the great bird and mammal diversity don’t forget to look down for one of our three species of garter snake. Maybe you’ll be adventurous enough to experience the wonder of stinky snake poop on your hands.

A striking specimen of the coast garter snake, Thamnophis elegans terrestris. Note the absence of red coloration on the head; this helps identify this species from the red-sided garters, T. sirtalis. 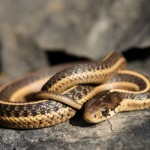 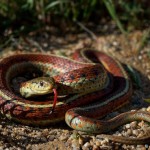 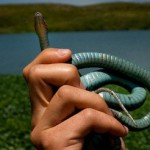 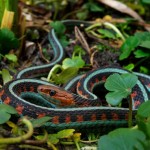 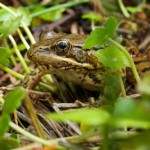 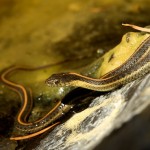 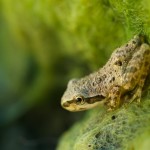 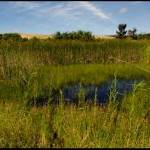 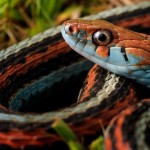