Here in the San Francisco Bay Area we have three species of garter snakes. Usually these species have preferred micro-habitats and niches to minimize their overlap and resulting competition. However, I spend a fair amount of time in the Pt. Reyes National Seashore Area where we can find all three species living together. The mix of grassland, marsh, ponds, and open space allows for a great diversity of wildlife and this is reflected by this species overlap.

A red-sided garter snake hides in the vegetation next to a small pond at Pt. Reyes National Seashore

The first is Thamnophis sirtalis, also known as the common garter snake. This species is the most widespread of the genus covering much of the United States and ranging into Canada where it is known from its mass overwinter emergences that number in the many thousands or tens of thousands. This species also exhibits a huge amount of variation with regards to its dorsal striping, side striping or checkering, ground color, and ventral color. In my wooded regions around the bay this snake seems to be the least encountered, although it can be locally common. Our subspecies, T. s. infernalis is known as the California red-sided garter snake and is a strikingly beautiful animal. This sub-species prefers watery habitats and is found in and around marshes and ponds where its preferred prey is amphibians, especially the Pacific chorus frog, Pseudacris regilla, and the threatened California red-legged frog, Rana draytonii. It is also one of the few predators of the highly toxic California newt, Taricha spp. In the Pt. Reyes area the snake has a slightly bluish dorsal stripe with a deep red and black checkered side transitioning to blue underneath. This species can grow t be 1-1/2 meters long but is usually less than half that size. The infernalis subspecies is very similar in appearance to the San Francisco garter snake, T. s. tetrataenia, found in a very restricted region along the coastal areas south of San Francisco towards Santa Cruz. That subspecies is endangered with most of its threat coming from development. It is also a beautifully patterned snake with the red sides forming a stripe bordered by black stripes with a pastel sky blue stripe added just before reaching the blue ventral side. Aside from scale counts, in my area, this species can be identified from the locally more common, Coast garter snake, T. elegans, by the red head and blue bellies. In T. sirtalis the red head and blue venter becomes less of a characteristic as you leave the immediate Bay Area. 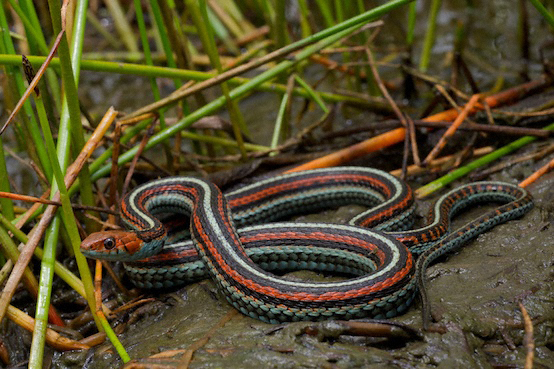 The endangered San Francisco garter snake, Thamnophis sirtalis tetrataenia, has a more solid red side than its checkered northern kin. This local species is considered by many to be North America’s prettiest snake.

Our most common garter snake is the western terrestrial garter snake, T. elegans, identified by the subspecies, the coast garter, T. e. terrestris. Around here this snake can be found in a wider variety of habitats than the red-sided garter. The coast garter can be found away from water regions whereas the red-sided is usually associated with wetland habitat. The coast garter is the snake most people around here are likely to see just by nature of its diverse habitats. T. elegans is generally a slightly shorter snake than T. sirtalis but in reality most commonly seen snakes are in the ½ meter range, meaning they are the same practical size. T. elegans is frequently mistaken as a San Francisco garter snake by people in and around San Francisco just because of the latter’s notoriety. However, T. s. tetrataenia is quite rare and associated more with water. While T. e. terrestris can be found in and around water it will also be found away from water. It is also far more common. The confusion is also complicated by most snakes’ rapid flight from people leaving the observer to catch a glimpse of a snake with a dorsal stripe, even if a flash of red is seen. This snake has a lot of variation, even within populations. ‘Ugly’ specimens can be darkly gray to brownish color with a faded yellowish dorsal stripe while others can have more intense coloration. The Bay Area snakes, when brightly colored, have a bright yellow dorsal stripe with intense red and black checkered sides. The amount of red varies but unlike T. s. infernalis the red does not extend onto the head, which is usually brownish grayish in T. e. terrestris. Around here the bellies of the coast garter are yellowish brown to gray and often flecked with red. This also separates them from the red-sided and SF garters. Coast garters are truly generalist feeders taking advantage of whatever prey the come across and adjusting their feeding to seasonally and locally available food. Like all garter snakes they give birth to live young and can produce up to a couple dozen baby snakes in a litter.